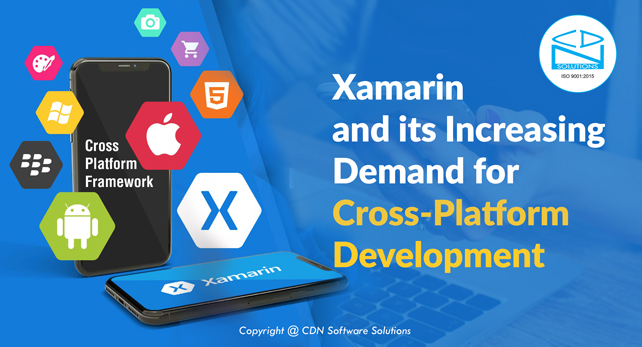 Xamarin is a software company that was founded back in 2011 and recently got acquired by Microsoft in 2016. Technically, Xamarin is a tool used for developing cross-platform applications. It offers tools to directly build Android, iOS as well as Windows apps with Visual Studio. These tools are provided as a built-in part of the IDE. Xamarin is easy to adapt as most of the code is written in C#. Hence, there is no need to learn objective C, Java or Swift to build apps. Xamarin is also known to support wearable devices. Xamarin is based on C# programming technology and can be used in the cross-platform mobile app development for Android, iOS and Windows. Xamarin apps are built with native UI and APIs to deliver better performance.

Why Xamarin is Becoming Popular for Cross-Platform Mobile App Development?

Xamarin is something that is making developers task easier. It provides tools that can be directly used to build cross-platform mobile applications that will perform similarly as the platform’s native app. It will not only have all the features of a native app but can also share the common codebase. It allows you to use almost any Android or iOS API in C# with the Xamarin tools.

Now, let’s talk about its UI. It’s true that you can use the common codebase. But, you’ll need to build separate UI for different platforms and ultimately merge it with the common codebase. This platform specific UI code layer provides the best user experience because the app would perform and look native on any platform.

If you are looking to develop an app that could reach a broader consumer audience and provide the best user experience then Xamarin is what you need. Still, not convinced? Contact CDN Software Solutions, And we’ll build a cross-platform app with Xamarin for you which would not require a large team of highly skilled developers dedicated to building an individual app for different platforms. Thereby saving lots of time, money and eliminating the hassle and challenges of developing platform-specific apps. Our years of experience and a distinctive approach to programming challenges make us an ideal Xamarin app development company to partner with, for both enterprises and startups.