Li-Fi or light fidelity basically work on the principle of visible light communication (VLC) system for data transmission, invented by German physicist Harald Haas. Li-Fi is like another Wi-Fi or wireless technology that make your broadband speed 100 times faster. Now you will think, how this will become possible? So to know that, lets take a ride on this blog…..

Li-Fi is one of the latest Internet technology that can beam your data using the power of light. If you are also sick of sluggish broadband speed, Li-Fi could be the answer. Li-Fi is a wireless technology that makes use of visible light in place of radio waves to transmit data at terabites per second speed that is more than 100 times the speed of Wi-Fi.

How Does Li-Fi Works

A ceiling-based LED lighting fixture encodes and modulates data messages from the Internet as light output at rapid speeds to a receiving photo detector, which converts the changes in light intensity to electrical current. In turn, the electrical current is converted into binary data stream and sent to any attached computers and mobile devices. 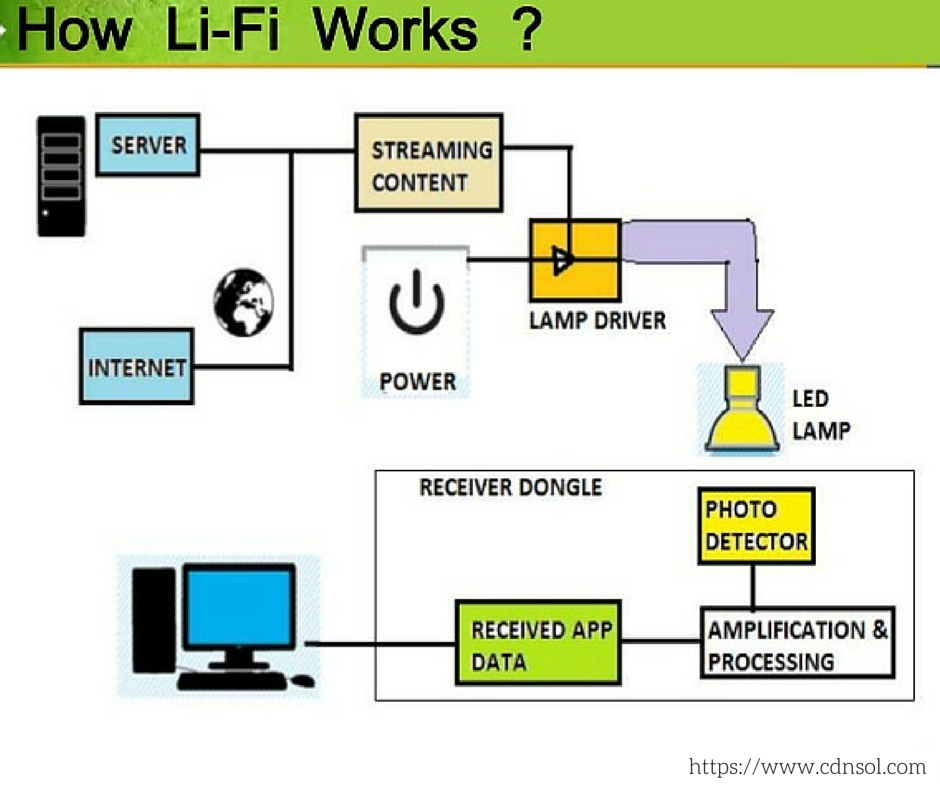 This brilliant idea was first showcased by Harald Haas from University of Edinburgh, UK, in his TED Global talk on VLC. He explained, “Very simple, if the LED is on, you transmit a digital 1, if it’s off you transmit a 0. The LEDs can be switched on and off very quickly, which gives nice opportunities for transmitting data.” So what you require at all are some LEDs and a controller that code data into those LEDs.

Li-Fi works according to VLC system. A basic VLC system contains 2 qualifying components that are….

Li-Fi is suitable for many content consumption Internet application such as audio and video downloads, live streaming etc.

So overall, it offers a great promise to overcome the existing limitations of Wi-Fi by providing for heavy-data communication in short ranges. Since it does not pollute, it can be called a green technology for device-to-device communication in world of the future Internet of Things (IoT).

Some More Advantages of Li-Fi

Li-Fi is not using very vastly, but there are some fields where it can be adopted right now that are street and traffic signals. Traffic lights can communicate to the vehicles and vice versa. Most of the vehicles have LED-based headlights and tail lamps that can communicate with each other and prevent accidents by exchanging information. Also, through the use of Li-Fi, traffic control can be made intelligent and real-time adaptable.

The design and construction of the LI-FI light source enable efficiency, long stable life, full spectrum intensity that is digitally controlled and easy to use.

So, with the said details, do you think Li – Fi will gain as much importance as Wi -Fi? Do leave your thoughts in comments below.