The biggest social media company of the world Facebook is aiming to launch a full-scale solar powered drone to provide internet access in remote parts of the world. According to the latest announcement Facebook has completed building it’s first full-scale drone, Aquila and now is ready it’s real world testing.

The solar powered drone has given the code name ‘Aquila’. It will be able to fly for three months continuously without landing. It will transmit the data with the help of laser. Facebook has planned to make more number of drones and connect together to provide internet access to large rural areas. 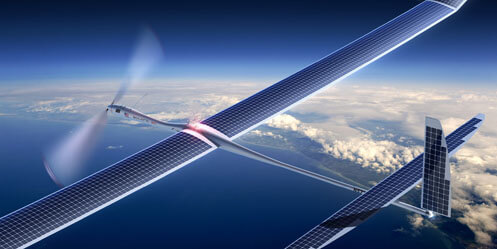 “Our mission is to connect everybody in the world. This is going to be a great opportunity for us to motivate the industry to move faster on this technology.” Said by Jay Parikh, Facebook’s vice-president of engineering.

According to Yael Maguire, the company’s engineering director of connectivity; this solar powered plane will be operated between 60,000 ft (18 km) and 90,000 ft (27km). This range is above from the altitude of the commercial planes. So it is unaffected by weather. The weight of this solar powered aircraft is 880 lbs (400 kg), which is less than the fifth recognizable Reaper drone, which is used by US army. The wingspan of this plane is 46 yards (42 m) long, while Reaper drone has only 16 yards (15m) length.

According to the Facebook, this solar powered plane ‘Aquila’ has the wingspan of Boeing 737 and Facebook will test it in USA later this year. This plane will be the maximum height in the day, while it will come down to its lowest height in the night, because it will conserve power when its solar panels not receiving charge from the sunlight.

The plane will be launched with the help of helium balloons, which will help to raise it up to its maximum height. Aquila will provide the internet to people on earth in a 50 km radius.

Facebook won’t charge from the users to provide Internet service. Instead of this, Facebook will sign tie-up with local Internet Service Providers to offer this service. So, small cellular towers and dishes will receive the signals sent by the aircraft. These signals will be converted into a Wi-Fi or LTE network, then people can connect to their smartphones. It is a simple functionality of this Solar Powered aircraft.

Although Facebook has tested this project in Britain in the March 2015, and it is able to provide internet access to the 10% of the population.

Although Google has already tested the same king of project in New Zealand in 2013. Actually, Google is also working on the same type of project the aim is the same for both the projects. The Google called its project as “Project Loon”. Google developed this project to offer wireless internet in rural areas. There will be a tough competition between Facebook’s ‘Aquila’ and Google’s Project Loon. It will be an interesting fight between them.