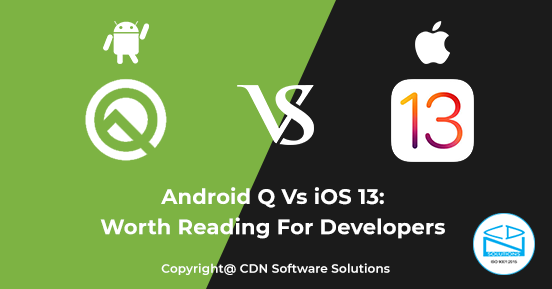 In this tech world, a lot of alike things are going on along with which comes comparison debate just like us humans who are the same but with different opinions. Here we are talking about Android and iOS battle of user-friendly and innovative features. Both these operating systems are the game changers for the mobile industry. They are the world’s most widely used mobile platforms and consumers from all over the world are keen to know about their new software upgrades, models, features, and launches.

Apple recently announces iOS latest features  iOS 13 for iPhones  at its annual WWDC event. Now, It comes with a number of notable features that not just improve the performance of the iPhone but also brings a bunch of improvements to the built-in apps. The feature set of iOS 13 is going to amaze all the iPhone users. Its latest software upgrades such as enhanced privacy settings and systemic dark mode. The company has promised to make its iPhones, even better, secure, and easier to use.

On the contrary, Google’s Android Q is also getting popularity, brings some amazing and attractive features including dark mode, AI and privacy enhancements.

If you are a developer, here’s a list of features and functionality of both the operating systems: Android Q and iOS 13 in detail. So, you can compare and select the best fit for the solution you’re about to develop

Let’s first have a look at Android Q features:

There’s no end to technological advancement and therefore it keeps on getting things better. Same is the case with improvements in the mobile operating system which was first recognized by Google. Google announced the potential foldable phones in the future. And let me know you that one of the best features that Android Q has is the support for large screens and foldable UI.

This feature complements multiple windows functionality. Android Q brought this feature allowing more than one app to run simultaneously, without pausing. Yes, it’s true that with Google’s multi-window, apps in the background will neither pause nor stop. Because with Android Q, apps in the background will also function normally while you focus on primary on gaming apps you can find at 918kiss website.

It’s a preview feature in Q developer preview. It’s an alternative to system alert window which would enable you to smoothly multitask from anywhere on a compatible device. These bubbles float on the top of the app and can be expanded as well as collapsed accordingly. And when the phone is locked, it appears like any other notification. This notification in Android Q will not fade until they are opened or dismissed.

With Android Q from now on, smart lock functionality will also be available in android devices which were up till now present only in Pixel devices. What’s different in this smart lock? This lock enables frictionless and speedy unlocking whenever the device is placed in a trusted location, connected to a known Bluetooth device, or when the device can identify the user’s face, voice, and body.

Android Q comes with pretty refreshing additions. It includes new Audio Playback Capture API and Screen Recorder for Videos. As both their name suggests, Playback Capture API will record audio playing in the app and Screen Recorder will record video screens. Moreover, you can also use a voice-over functionality to speak while you capture the screen.

Siri was the first ever voice assistant in the market. With awesome features and update. But, Google Assistant steals the show here. They are not even comparable. Siri is still robotic, somewhat, while Google Assistant sounds natural.

Most of all, Google Assistant is extremely good with deciphering commands and matching search results while Apple still lags behind. Without a doubt, the award goes to Google!

Android Q comes with Sharing Shortcuts API replacing the Direct Share API, making hassle-free delivery experience. This new feature sets targets in advance instead of waiting for retrieving the result only when requested. You can even switch applications to share media files.

This is the most talked feature of Android Q making UI appealing and intuitive. Let’s first learn about what’s Dark Theme. It’s nothing else but as the name suggests a dark screen. Yes, this mode turns the bright white screen into a dark black screen with only a few pixels light up. This also serves the following benefits: It decreases power consumption, offers better visibility to those who can’t bear bright light, and can be used in a low light environment.

Now, let’s have a look at the iOS 13 features too

With the introduction of iOS 13, Apple has raised the bar for photo and video editing by offering new possibilities of creativity and control. Its powerful photo editing tool has a user-friendly interface. This intelligent tool simplifies browsing, organizing, and fine-tuning of photos using contrast, highlights, shadows, and sharpness. IOS 13 also enables videographers to add filters, and crop & rotate footage.

New location controls have been introduced in iOS 13 that limits location data sharing with applications. It includes a brand-new option called one-time location which will allow apps to access location just one time. This feature will also notify you whenever an app running in the background uses your location data. Apple iOS 13 is rebuilding maps to include better information and graphical representation of roads, pedestrian, and precise addresses

As the name suggests, Apple’s Find My allows its users to find their devices even when it’s not connected to the internet. iOS 13 comes with this Find My which is the result of the merger of two app- Find My Friends and Find My iPhone. So, now with iOS 13 Find My, you can trace your phone as well as friends using the same app even when you are offline.

Siri with a New Voice

Siri’s new voice now sounds more organic and less robotic. Additionally, Suggested Automations are now supported by Siri Shortcuts so users can create personalized shortcuts anytime. This apart, Siri is all up for Live Radio support tuned in to iHeartRadio, radio.com, and TuneIn.

It can further read incoming messages with AirPods the moment they arrive from any messaging app that’s SiriKit-enabled. Along with this, it also comes with a speech recognition technology which makes Voice Control more accurate and powerful.

To add to that, Apple is planning to set up an Indian English Voice support for its India users

After years of competing platforms offering a similar experience, Apple finally added a new swipe keyboard option with iOS 13. With iOS 13 comes Quick Path, which makes typing super easy. iOS is now to recognize your swipes, offer suggestions through the QuickType bar, and help you auto-complete your sentences. The new feature called Swipe Typing which enables one-hand typing where you can swipe through letters to form a word.

With the introduction of iOS 13, Apple also shows its concern towards privacy. iOS 13 has a feature that automatically silences calls from unknown people. Also, its Sign-In With Apple feature protects your identity and takes care of your privacy by authenticating your identity via Touch or face ID.

Apple revamped its reminder app in iOS 13. The app will have a feature to add new categories so that you can separate your task based on urgency. It also has an interesting and helpful feature which will remind you about your task at the time for when you planned to do it.

As learned earlier, Dark Mode is similar to Dark Theme. This feature was first introduced in Android Q and now is an anticipated feature of iOS 13 as wells. The dark mode is applicable from wallpaper, widgets, and notifications to Calendar to Messages. Therefore, this point goes to iOS.

Features like gaming, swipey keyboards, editing, and sharing photos are worth noticeable on both the operating systems. When it comes to security and privacy settings, iOS always comes on the number one position. With the above-listed features and functionalities, it’s clear that both the operating systems can redefine the future of mobile devices. Now, it’s up to you whose features are useful for you at the moment. Because it completely depends upon what you are looking for.

As this blog contains the best features on Google’s Android Q and iOS 13, as it does not cover every feature that Google and Apple is announced. But in this digital era every mobile app development company wants to develop mobile apps with this amazing feature. CDN Software Solutions Pvt. Ltd  also has an expertise team of mobile app developers who are proficient in delievering enterprise mobility solutions with those amazing features.