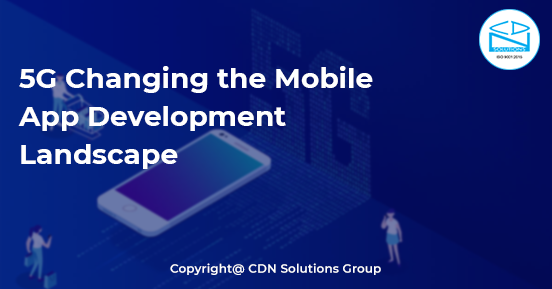 Today, high internet speed is all we need whether we are loading a website or transferring information. But, transmitting data over globally connected devices is not easy and takes time even with 4G. Don’t worry, with the rollout of 5G, it’s predicted that it would be possible for us to transmit a million MBs of data in the blink of an eye. Don’t you believe it? Just wait till 2020 for its worldwide commercial launch to see what all possibilities it would offer you.

Unlike its predecessors 2G, 3G, & 4G, 5G is an entirely new network architecture bringing technological paradigm shift, a game-changing technology for the mobile app world. It’s the fifth generation of wireless mobile telecommunication that offers better opportunities than its predecessors along with a much faster data transfer speed of 2.8 Gbit/s. But, speed is not only the factor that makes it better but it has many other notable benefits as well. With the release of 5G, mobile apps are expected to function more efficiently and smoothly which in turn will boost the overall productivity of developers and users.

Why is 5G Gaining Importance?

5G is supposed to have a latency of just one millisecond. This, in turn, will lead to fewer delays and interfaces, and hence would prove handy for augmented reality and virtual (AR/VR) mobile apps. Now, users will see the emergence of Augmented Reality (AR) and Virtual Reality (VR) in almost all phases of life around them.

From attending a live event in CA while being at home in Canada to seeing the history of every room and turn of the monument, AR/VR will now finally go mainstream with 5G. While the examples that we gave above are more inclined towards entertainment, there are a number of other industries – Healthcare, Education, Army, etc that will witness the benefit that the platform where Reality and Virtual surrounding is same.

5G will have increased connection density which is even more than 4G. 5G will support connectivity of up to 1 million devices in the same space. And, this will prove a big advantage for IoT (Internet of Things) app development.

Internet of Things (IoT) is the hugely popular segment of the tech market for a variety of reasons. More aware, more connected devices are smarter and more capable which helps consumers to buy-in variety of technologies such as smart home gadgets, wearable devices and wearable sensors that will tap in and take advantage of these new devices.

IoT has become one of the most important sectors in the technology field, with dynamic large-scale applications for consumers and enterprise organizations. 5G promises to unlock IoT capabilities that were previously unattainable on 4G networks. 5G will introduce major innovations, like high connection speed, increase in capacity, and lower latency. Over time, these benefits will lead to technological milestones that will have a significant impact on business strategy.

5G uses higher radio frequency and shorter wavelength which provides much better precision capabilities. Hence, it will prove useful for mobile apps that are high-precision GPS-enabled. 5G has higher frequency where signals travel much shorter distances. So, 5G helps to improve coverage and connectivity for everybody that includes location information. Today, many countries want to follow the trend of 5G innovations, and one of them is South Korea, the country that has launched the world’s first nationwide 5G mobile networks.

As we learned above hat 5G will have reduced latency and increased speed which is likely to lower battery consumption. This means 5G will extend the battery life of mobile devices by 10 times. Hence, it will benefit mobile owners because they’ll be able to use mobile apps for a longer period. With the innovation behind 5G going to be related to various technical aspects, a few very important  points are:

Contribution to the Tourism Industry –

With the help of 5G, developers will be able to build navigational mobile apps containing all the popular historical places from different countries around the world. Along with this, it will also offer a bunch of unique features to its users. Hence, will provide new opportunities to the tourism industry.

Fifth-generation is more dependable and capable than the generations before it. This means higher and faster internet connectivity, which will ultimately result in better accessibility and functionality of smart devices. It is a gift for Mobile Owners as well as mobile app developers.

We’re trying to give a clear idea of a bright future with 5G. So, what are you waiting for? Is your business ready to switch to 5G? It’s time you start preparing your apps with 5G possibilities in mind so that you are not left behind in the race of 5G.

For any idea related to 5G mobile app development just connect CDN Software Solutions at contact@cdnsol.comor call us +1-347-293-1799   or get a free quote HERE.