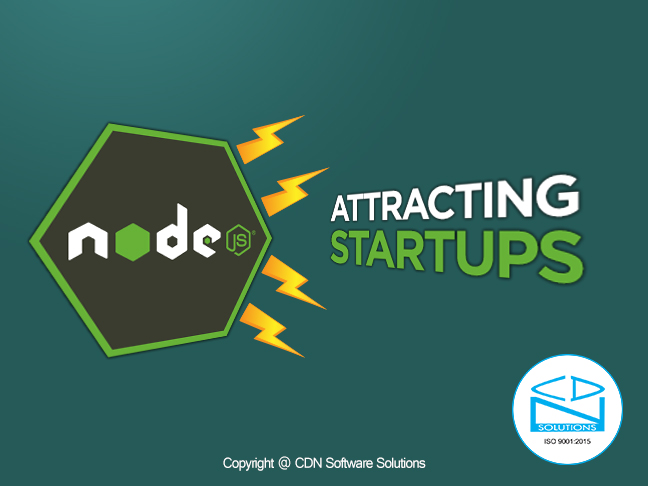 Technology trends keep on advancing based on multiple reasons. Same is the case with startups. They are opting Node.js framework for mobile application development depending on several factors like speed, scalability, ease of coding, and more. They are even using it for cross-platform mobile applications. In the modern day, real-time information is paramount and Node.js plays a vital role in it. Do you know even the most popular apps like Slack, Uber, and PayPal are built over Node.js?

Node.js is an open-source, cross-platform JavaScript run-time environment. It’s free and runs on different platforms – Windows, Linux, Mac OS, etc. It eliminates waiting for the computer file system to read the request and server to return the content to the client. It simply continues with the next request. It runs single-threaded, non-blocking, asynchronously programming; which is memory efficient.
Source: wikipedia.org

Let’s have a look at some of the reasons why startups are leaning towards Node.js for their application development:

Scalability is the basic benefit that attracts startups towards choosing Node.js. It allows startups to develop lightweight and fast systems that give a good real-time response and can be scaled up later. Node.js has an unmatched capability to maintain live server-side connections along with handling a huge number of concurrent connections. In 2013, eBay also considered it more capable as compared to Java, in terms of scalability to build server-side stacks for mobile devices. There are many other established brands who benefitted from this. ebay, LinkedIn, and Groupon are the few notable companies among them.

Node.js is extremely lightweight with no compilations which allow you to just write and deploy the code. An important factor that makes it faster is it uses the same language for frontend and backend. For quick development also, it offers an array of tools delivering innovative features that developers can easily incorporate in their coding. This consequently ensures faster response time by making the time-to-market cycle shorter. Thereby creating more value in less time with little efforts. Recently some of the giants like PayPal and Walmart adopted Node.js because it helped them reduce response time at least by half while doubling the number of requests.

It Has Low Learning Curve

Whenever a new technology is introduced, developers tend to learn it from scratch. This can be even more challenging to some and because we are talking about startups, we may expect the developers to be beginners. But, thanks to Node.js which surprisingly have a low learning curve. It offers excellent documentation and tutorial videos about the working of Node which offers great help to new developers. Node is quite easy to use since it utilizes javascript, which is known by most of the developers. Hence, the developers take not more than a few weeks to actually master the framework.

Node.js allows for easy and quick development for mobile platforms. Its high speed, performance, and adaptability makes it best suitable platform for web development. It enables developers to build critical functions of a responsive website in a matter of a few days. This framework allows you to build a number of apps in a short span of time by ensuring fewer lines of script and robust feature set. Using the same language in frontend and backend also helps in speeding up the development process. Node.js proves to be crucial for startups where development speed is an important factor to keep up with the demand.

You need not worry about the authentication of Node.js as the number of companies using it has dramatically increased in the past years. It has been well-tested by some of the giants like PayPal, Netflix, and eBay. It’s not going to be neglected or abandoned any time soon.

More and more companies are giving Node.js a try. It seems to be a great choice for startups who want to build their app in no time. If you are a startup looking for a Node.js developer to build your app then you are at the right place. CDN Software Solutions can get the application ready for your startup in no time! Feel free to contact us anytime!